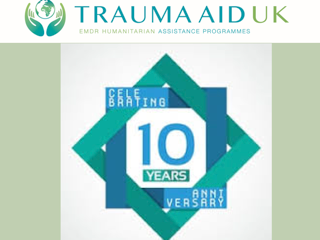 EMDR humanitarian programmes are part of a worldwide movement that began in 1995 in response to the Oklahoma City bombing in the United States. One hundred volunteer clinicians who were trained in EMDR therapy provided pro bono treatment for the bombing victims and front-line responders, of whom 80% benefitted within three treatment sessions. They went on to provide free trainings in EMDR therapy for clinicians. The feedback was so positive that a not-for-profit organisation was soon established, which is now called Trauma Recovery, EMDR Humanitarian Assistance Programs. This organisation has coordinated projects throughout the U.S. (such as 9/11 and hurricane Katrina) and internationally in more than 30 countries.

These HAP organisations have taken EMDR to communities affected by the consequences of psychological trauma, with projects in China, Indonesia, Ukraine, India, Palestine, Pakistan, South America and Cuba and led to EMDR becoming increasingly well-known across several continents.

British representatives have worked with international colleagues on projects in India, Palestine and Jordan.

EMDR Asia is an international professional organisation which was launched in July 2010 in Bali. EMDR Asia is the culmination of HAP projects in India, Pakistan, Indonesia and China. The next major goal for HAP will be to establish an EMDR Association in the Middle East and an EMDR Africa Association.

In 2016, HAP Europe changed its name to Trauma Aid Europe and we became known as Trauma Aid UK.

As an independent organisation, Trauma Aid UK began its first overseas project in Bosnia-Hercegovina in 2009 which is an ongoing project. In 2013, Trauma Aid UK expanded to run a project in the Middle East, in response to the ongoing conflict in the region.

Trauma Aid UK is now in its 10th year of being an independent charitable organisation.  We continue to expand our work where the need is greatest and for the moment this is focussed on the Middle East.

Countries in this region are at various stages of developing their own national organisations and we expect that by 2020 we will have been instrumental in founding a regional Arab EMDR Association which will act as an umbrella association for countries in the region, including the Maghreb and North Africa.

Following the Manchester and London bombings in 2017, Trauma Aid UK was involved in the development of a national association that could respond to mass trauma.  This new independent organisation, The Trauma Response Network is now able to respond to any further events that require an immediate response.  Many EMDR clinicians have been trained in Early Response EMDR Interventions that can be used to good effect in such circumstances as natural disasters or acts of mass violence or terrorism.

Our growth requires resources in terms of money and time and for this we need the support of our members.